An introduction to periodic pattern mining

In this blog post I will give an introduction to the discovery of periodic patterns in data. Mining periodic patterns is an important data mining task as patterns may periodically appear in all kinds of data, and it may be desirable to find them to understand  data for taking strategic decisions. 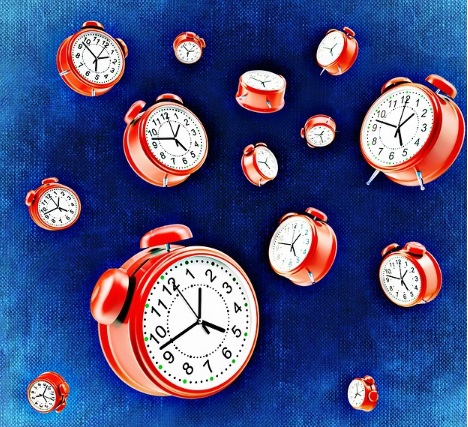 For example, consider customer transactions made in retail stores. Analyzing the behavior of customers may reveal that some customers have periodic behaviors such as buying some products every week-end such as wine and cheese. Discovering these patterns may be useful to promote products on week-ends, or take other marketing decisions.

Another application of periodic pattern mining is stock market analysis. One may analyze the price fluctuations of stocks to uncover periodic changes in the market. For example, the stock price of a company may follow some patterns every month before it pays its dividend to its shareholders, or before the end of the year.

The problem of discovering periodic patterns can be generally defined as follows. Consider a database of transactions depicted below. Each transaction is a set of items (symbols), and transactions are ordered by their time.

Here, the database contains seven transactions labeled T1 to T7. This database format can be used to represent all kind of data. However, for our example, assume that it is a database of customer transactions in a retail store. The first transaction represents that a customer has bought the items a and  c together. For example, a could mean an apple, and c could mean cereals. 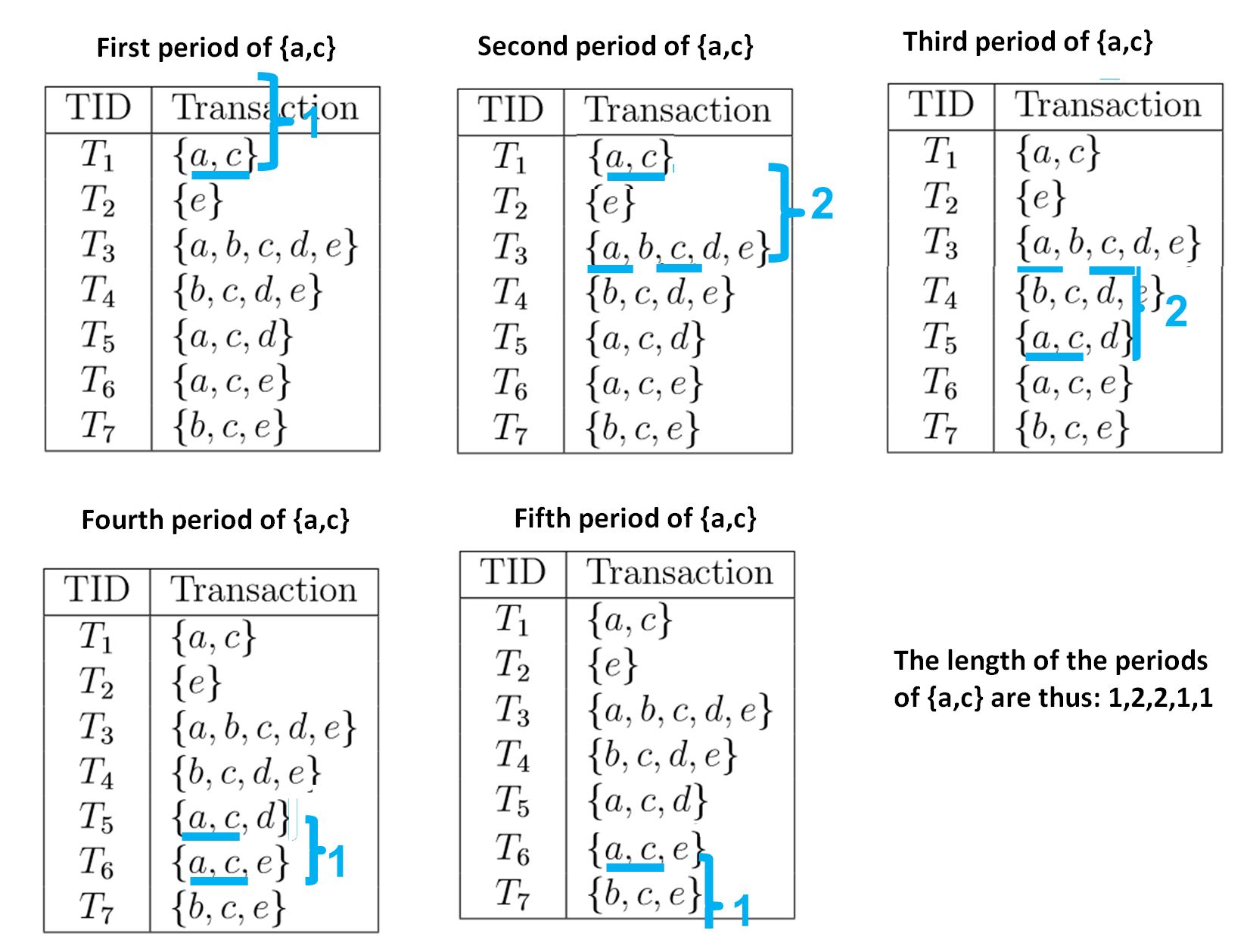 The first period of {a,c} is what appeared before the first occurrence of {a,c}. By definition, if {a,c} appears in the first transaction of the database, it is assumed that this period has a length of 1.

Now, the fifth period is interesting. It is defined as the time elapsed between the last occurrence of {a,c} (in T6) and the last transaction in the database, which is T7. Thus, the length of this period is also 7 – 6  = 1 transaction.

Several algorithms have been designed to discover periodic patterns in such databases, such as PFP-Tree, MKTPP, ITL-Tree, PF-tree, and MaxCPF algorithms. For these algorithms, a pattern is said to be periodic, if:
(1) it appears in at least minsup transactions, where minsup is a number of transactions set by the user,
(2) and the pattern has no period of length greater than a maxPer parameter also set by the user.

Thus, according to this definition if we consider minsup = 3 and maxPer =2, the itemset {a,c} is said to be periodic because it has no period of length greater than 2 transactions, and it appears in at least 3 transactions.

This definition of a periodic pattern is, however, too strict. I will explain why with an example. Assume that maxPer is set to 3 transactions. Now, consider that a pattern appears every two transactions many times but that only once it appears after 4 transactions. Because the pattern has a single period greater than maxPer, this pattern would be automatically be deemed as non periodic although it is in general periodic. Thus, this definition is too strict.

Thus, in a 2016 paper, we proposed a solution to this issue. We introduced two new measures called the average periodicity and the minimum periodicity. The idea is that we should not discard a pattern if it has a single period that is too large but should instead look at how periodic the pattern is on average. The designed algorithm is called PFPM and the search procedure is inspired by the ECLAT algorithm. PFPM discovers periodic patterns using a more flexible definition of what is a periodic pattern. A pattern is said to be periodic pattern if:
(1) the average length of its periods denoted as avgper(X) is not less than a parameter minAvg and not greater than a parameter maxAvg.
(2) the pattern has no period greater than a maximum maxPer.
(3) the pattern has no period smaller than a minimum minPer. 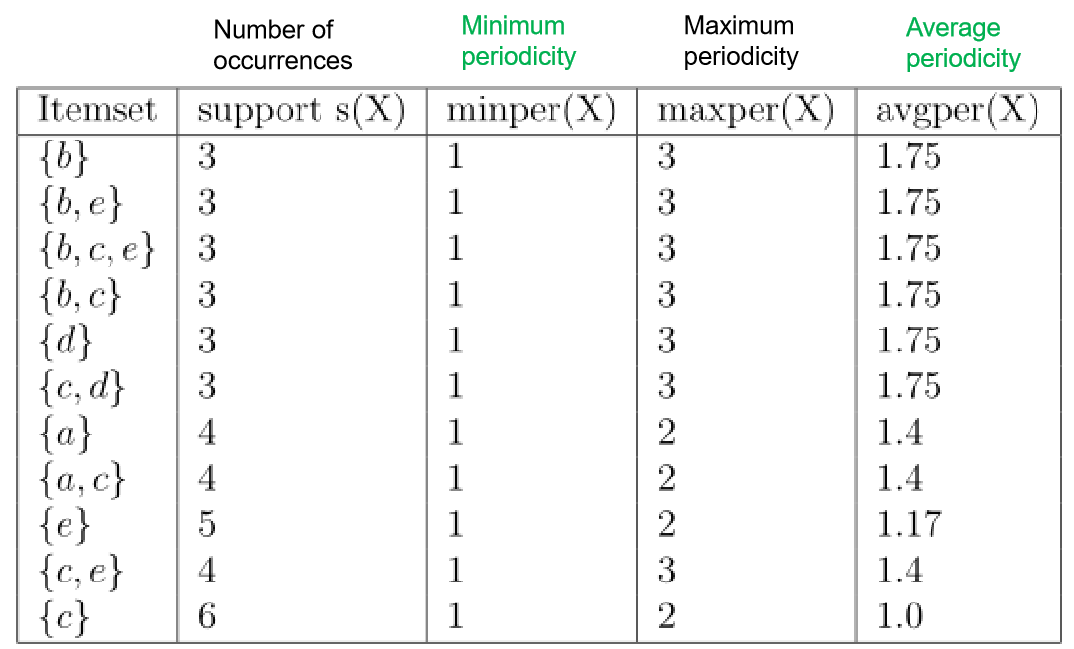 An implementation of the PFPM algorithm for discovering periodic patterns, and its source code, can be found in the SPMF data mining software. This software allows to run the algorithm from a command line or graphical interface. Moreover, the software can be used as a library and the source code is also provided under the GPL3 license. For the example discussed in this blog post, the input database is a text file encoded as follows:

where the numbers 1,2,3,4,5 represents the letters a,b,c,d,e. To run the algorithm from the source code, the following lines of code need to be used:

The output is then a file containing all the periodic patterns shown in the table.

Note that there also exists extensions of the problem of discovering periodic patterns. For example, another algorithm offered in the SPMF library is called PHM. It is designed to discover “periodic high-utility itemsets” in customer transaction databases. The goal is not only to find patterns that appear periodically, but also to discover the patterns that yields a high profit in terms of sales.

Another related problem is to find stable periodic patterns. A  periodic pattern is said to be stable if its periods are generally more or less the same over time. The SPP-Growth and TSPIN algorithms were designed for this problem.

Another related problem is to find periodic patterns in multiple sequences of transactions instead of a single one. For example, one may want to find patterns that are periodic not only for one customer but periodic for many customers in a store.

There are also many research opportunities related to periodic patterns, as this subject as not been extensively studied. For example, some possibility could be to transform the proposed algorithms into an incremental algorithm, a fuzzy algorithm, or to discover more complex types of periodic patterns such as periodic sequential rules.

Also, in this blog post, I have not discussed about time series (sequences of numbers). It is also another interesting problem to discover periodic patterns in time series, which requires different types of algorithms.

20 Responses to An introduction to periodic pattern mining