The top journals and conferences in data mining / data science 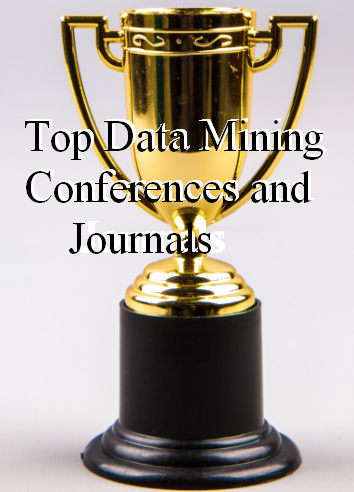 A first ranking is the Google Scholar Ranking (https://scholar.google.com/citations?view_op=top_venues&hl=en&vq=eng_datamininganalysis). This ranking is automatically generated based on the H5 index measure.  The H5 index measure is described as “the h-index for articles published in the last 5 complete years. It is the largest number h such that h articles published in 2011-2015 have at least h citations each“. The ranking of the top 20 conferences and journals is the following:

Some interesting observations can be made from this ranking:

Another automatically generated ranking is the Microsoft ranking of data mining conferences (http://academic.research.microsoft.com/RankList?entitytype=3&topdomainid=2&subdomainid=7&orderby=1). This ranking is based on the number of publications and citations.  Contrarily to Google, Microsoft has separated rankings for conferences and journals.

Besides, Microsoft offers two metrics for ranking :  the number of citations and the Field Rating. It is not very clear how the “field rating” is calculated by Microsoft. The Microsoft help center describes it as follows: “The Field Rating is similar to h-index in that it calculates the number of publications by an author and the distribution of citations to the publications. Field rating only calculates publications and citations within a specific field and shows the impact of the scholar or journal within that specific field“.

Here is the conference ranking of the top 30 conferences by citations:

And here is the top 30 conferences by Field rating:

Now let’s look at the top 20 data mining journals according to Microsoft, by citations.

And here is the top 20 journals by Field Rating.

Now, another popular way of ranking journals is using their impact factor (IF). I have taken some of the top data mining journals above and obtained their Impact Factor from 2014/2015 or 2013, when I could not find the information for 2015. Here is the result:

In this blog post, we have looked at three different rankings of data mining journals and conferences:  the Microsoft ranking, the Google ranking, and the Impact Factor ranking.

All these rankings are not perfect. They are somewhat accurate but they may not always correspond to the actual reputation in the data mining field.  The Google ranking is more focused on the data mining field, while the Microsoft ranking is perhaps too broad, and seems to have no restriction on time. Also, as it can be seen by observing these rankings, different measures yield different rankings. However, there are still some clear trends in these ranking such as TKDE being ranked as one of the top journal and KDD as the top conference in all rankings. The top journals and conferences are more or less the same in each ranking.  But there are also some strange ranks such as KAIS and Intelligent Data Analysis being ranked higher than TKDD in the Microsoft ranking.

Do you agree with these rankings?  Please leave your comments below!

Update 2016-07-19:  I have updated the blog post based on the insightful comments made by Jefrey in the comment section. Thanks!