Last week, I have attended the ACM SAC 2016 conference (31st ACM Symposium on Applied Computing). It was held in Pisa, Italy from the 4th to the 8th April 2016. In this blog post, I will briefly discuss this conference. 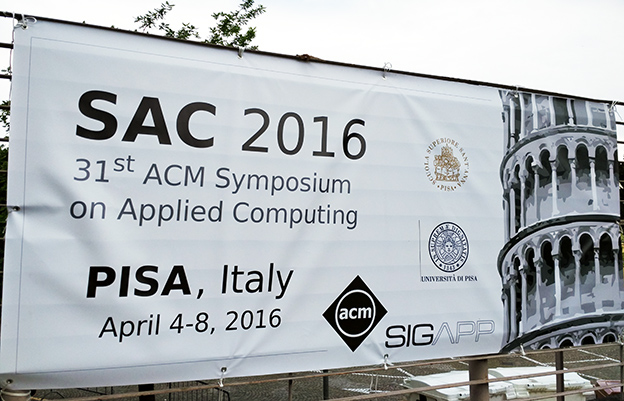 About the SAC conference

It is not the first time that I attend the SAC conference. I had papers published in this conference in 2011, 2013, 2015 and now 2016. This conference is a conference where it is possible to submit papers in multiple tracks, where each track has its own topic. The topics are quite varied ranging from programming languages, to intelligent virtual learning environment to data mining.  Personally, I am particularly in the data mining and data stream tracks, which are somewhat competitive and publish some high quality papers.  Last year, for example, the acceptance rate of the data mining track for full papers was about 20 %.

Also, this conference is a good place for meeting European researchers, as it was held in Europe. But it was quite international, with a great number of people coming from other continents. I have also had good discussions with some well-known researcher.

Finally, another good thing about this conference is that it is published by the ACM and the proceedings are indexe by DBLP and other important indexes in computer science. 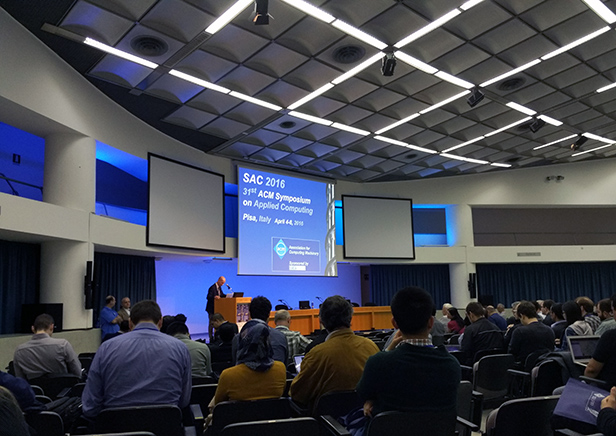 The conference was well-organized in general. There might always be something to complain about. But in general the organizers did a very good job, as well as the student volunteers.

The location was also quite good. Italy has good weather and the people were friendly. Even had the occasion to take a few pictures with the leaning Pisa tower.

I have attended most of the talks from the data mining track.  The main topics were:  clustering, scalable algorithms for big data, graph sampling, associative classifiers, classification, itemset mining, and vizualization.

Me and my colleagues have presented two papers respectively on (1) a new algorithm for mining recent weighted frequent itemsets, and (2) a new efficient algorithm for mining closed high utility itemsets named EFIM-Closed.  For that later paper, I have received a nomination for the best poster award. 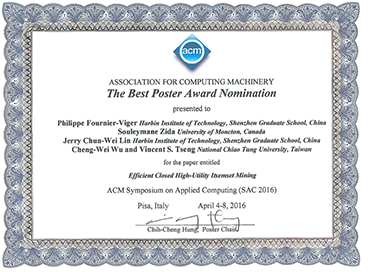 It was announced that the SAC 2017 conference will be held in Marrakech, Morocco, March 27 – 31, 2017.  It may be very interesting to attend this conference next year, for the reasons above, but also for the location, as there are not so often some big international conferences in Morocco. 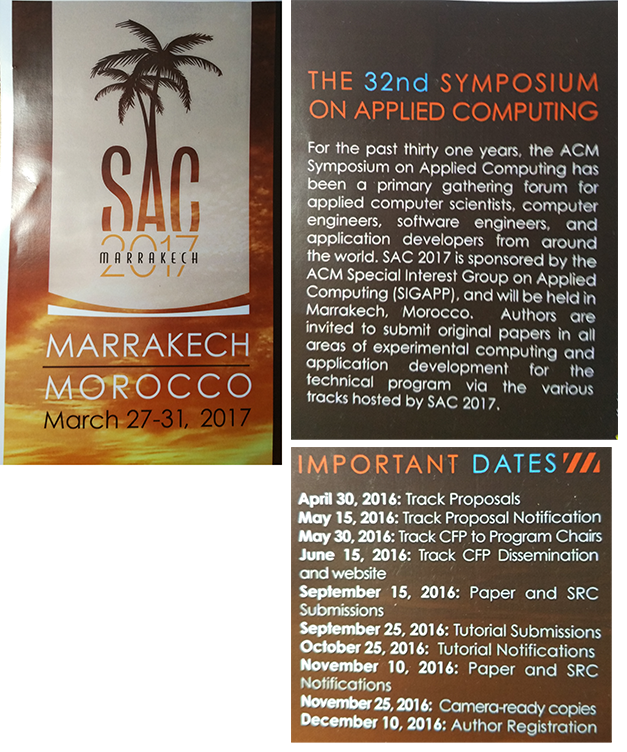 That is all for day (it was just intended to be a short blog post)!

Philippe Fournier-Viger is a full professor  and also the founder of the open-source data mining software SPMF, offering more than 110 data mining algorithms.

3 Responses to Brief report about the ACM SAC 2016 conference